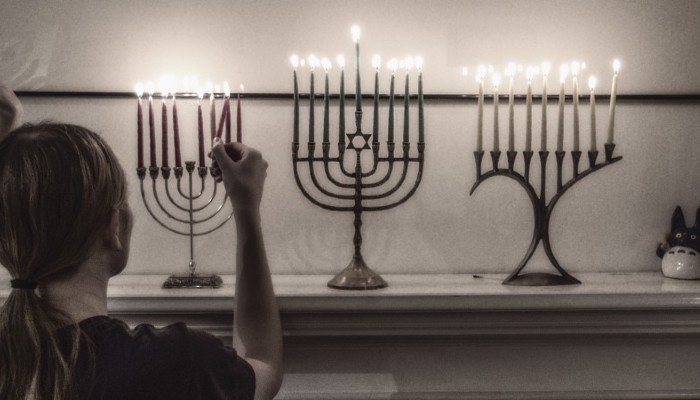 Put on your yarmulkes, it’s time for Hanukkah! You know the next line: “instead of one day of presents, we have eight craaaazy nights!” Even though you might know every line in Adam Sandler’s magnum opus, you may not know why we celebrate the “Festival of Lights. But who could blame them? There are as many spellings of Hanukkah (or is it Chanukah? Or Channukkah?) as there are spins of a dreidel. And when does it even start? Hanukkah falls each year in December. Or is it late November? Or sometimes January? While some say the differing dates are due to the differences between the Hebrew and Gregorian calendars, I’m convinced they change to keep the desktop calendar business afloat. So, I felt it was a good opportunity for me to be a mensch and take everyone on an exploration of Hanukkah. Like a young Mandy Patinkin, I will continue the long standing tradition of re-telling the Hannukah story:

Let’s take a journey back twenty-one centuries in history.  The area occupying modern-day Jerusalem was part of the Roman Empire and ruled by the Syrian-Greeks who wanted to convert the population to their religion.  However, a small band of Jewish inhabitants and warriors, known as the Maccabees, sparked a rebellion and defeated the larger Syrian army.  I wonder if this was that first time in history they used the “David vs. Goliath” cliche to describe the win…

Once the Maccabees claimed victory, they rushed to the Great Temple in Jerusalem to light its Menorah which was never to go out.  Although they found only a small amount of oil, a miracle occurred when it lasted for eight days.  Jews only celebrate the miracle of the oil; not war.

I know nowadays this miracle may seem modest, but if you’ve ever been in the middle of the desert without light or electricity, you celebrate when you get a spark.

The first and most recognizable Hanukkah tradition is the candle lighting (or candle lightbulb twisting for some).  Families gather in their homes to light the Menorah (or Channukkiah) which consists of eight candles of equal height plus a ninth “servant” candle sitting above the rest.  The servant candle, or Shamus, is used to light one candle per day from right to left to commemorate the miracle of the oil.  The Menorah is then placed in a visible area to remember what happened in Jerusalem two thousand years earlier. 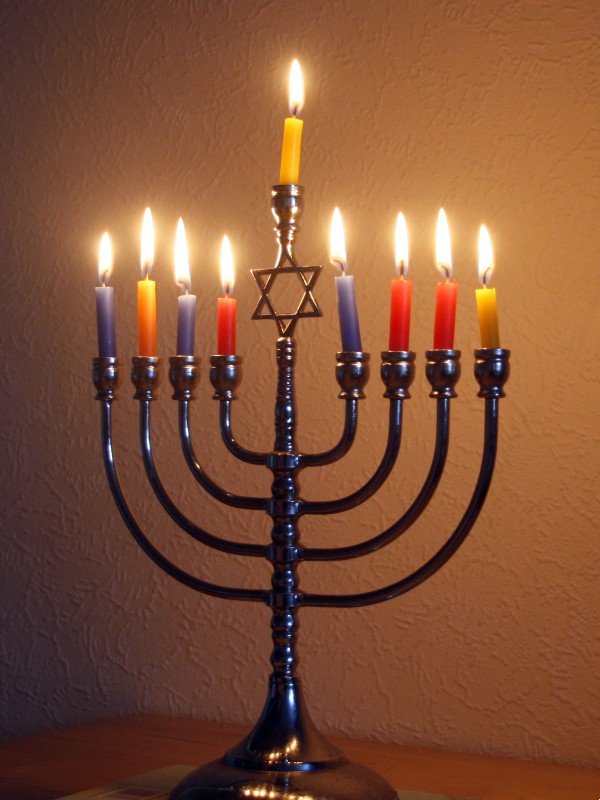 The next Hanukkah tradition consists of something I believe all holidays should prominently feature – gambling. Here is the game: after a pot consisting of chocolate, candy, and other small items is collected, a dreidel (a spinning top) with four sides is spun and will land on one of the following letters:   (shin), (hay), (gimel), (nun).  These are the first letters in the translated Hebrew phrase, “a great miracle happened there (Jerusalem).”  (In Israel, one letter is changed to say, “a great miracle happened here.”)  Here are the rules:

I still remember the hot streak I went on in my dreidel spinning prime during the Hanukkah of ’95.  By the end of the game, I walked out of my grandparents’ house with a garbage bag full of chocolate and the deed to my cousin’s jungle gym. 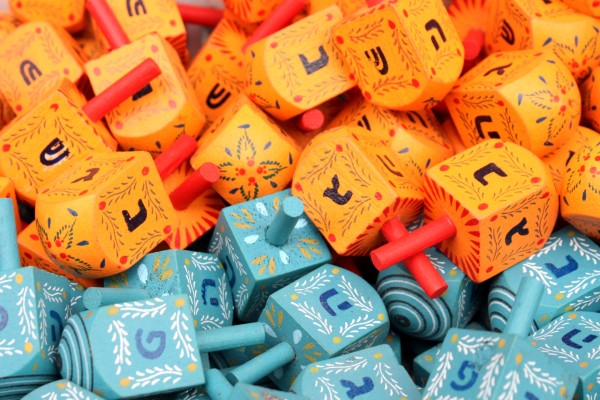 Another Hanukkah tradition is gift giving.  This tradition is actually a Jewish-American invention. Where Jews in the “old country” once only exchanged “gelt” or small amounts of chocolate or candies,  American Jews have begun the tradition of gift giving now due to its proximity to Christmas.  The unknown first Jewish child that guilt tripped their parents into getting them presents like their Christian friends is one of my greatest heroes.

Now, on to my favorite category on any list of any topic: food.  As Walter Sobchak eloquently tells “The Dude” in The Big Lebowski, the Jewish people have had, “three thousand years of beautiful tradition from Moses to Sandy Koufax.”  And I am certain we used that entire time to perfect one thing: the potato pancake. 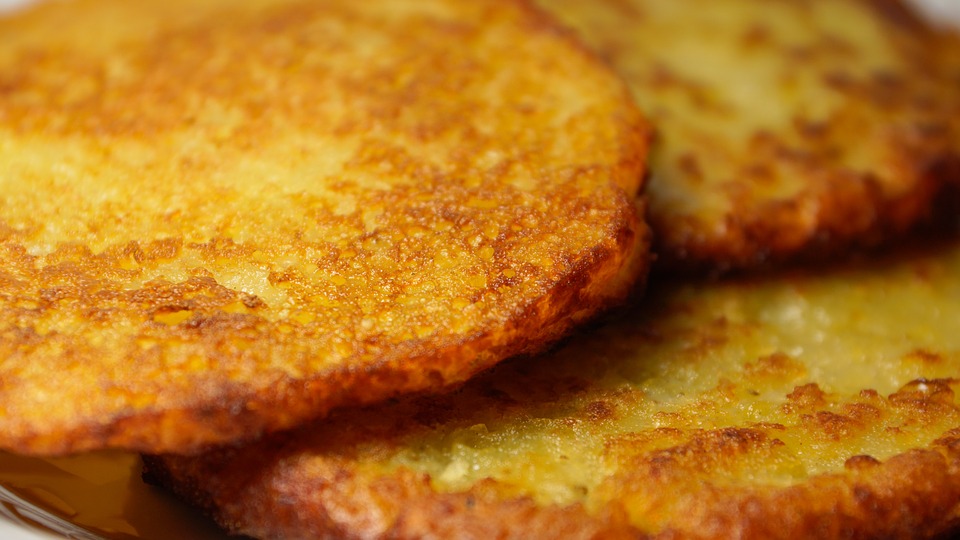 Potato pancakes – or latkes – are pretty much mashed potatoes fried in a pan with vegetable oil. Perfectly crunch on the outside and creamy on the inside, one source described these treats as “slammin’”. Whether you eat it with apple sauce, sour cream or plain, it is amazing. Oily foods are the tradition on Hanukkah; another homage to the miracle oil of the Great Temple in Jerusalem.

Not to be outdone, for dessert on Hanukkah, sufganiyot (plural) are eaten.  A sufganiyah (singular) is the widely loved jelly filled round doughnut.  Who knew that Dunkin Donuts already specialized in traditional Hannukah desserts?! 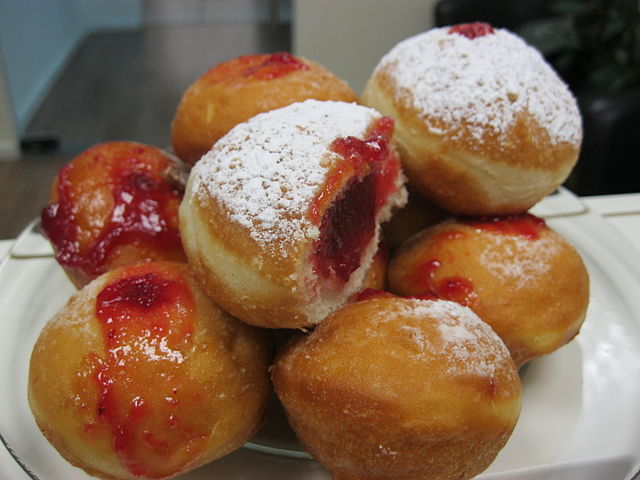 Though not the most religious holiday, one thing has remained constant: giving thanks for the opportunity to be with family loved ones. The traditions of Hanukkah have morphed and changed throughout the years, and in the United States, Hanukkah has become a part of the holiday season in December. I hope you grab some latkes, sing “Dreidel, Dreidel” in your best Barbara Streisand impersonation and have a happy, happy, happy, happy Hannukahhhhhhhhh (Adam Sandler voice)!